The Fashion Archives on knowing your audience

Sharing a desire to capture the unique story of fashion in Queensland, Nadia Buick and Madeleine King founded The Fashion Archives, an online publication about the past and present of fashion and dress in their home state. 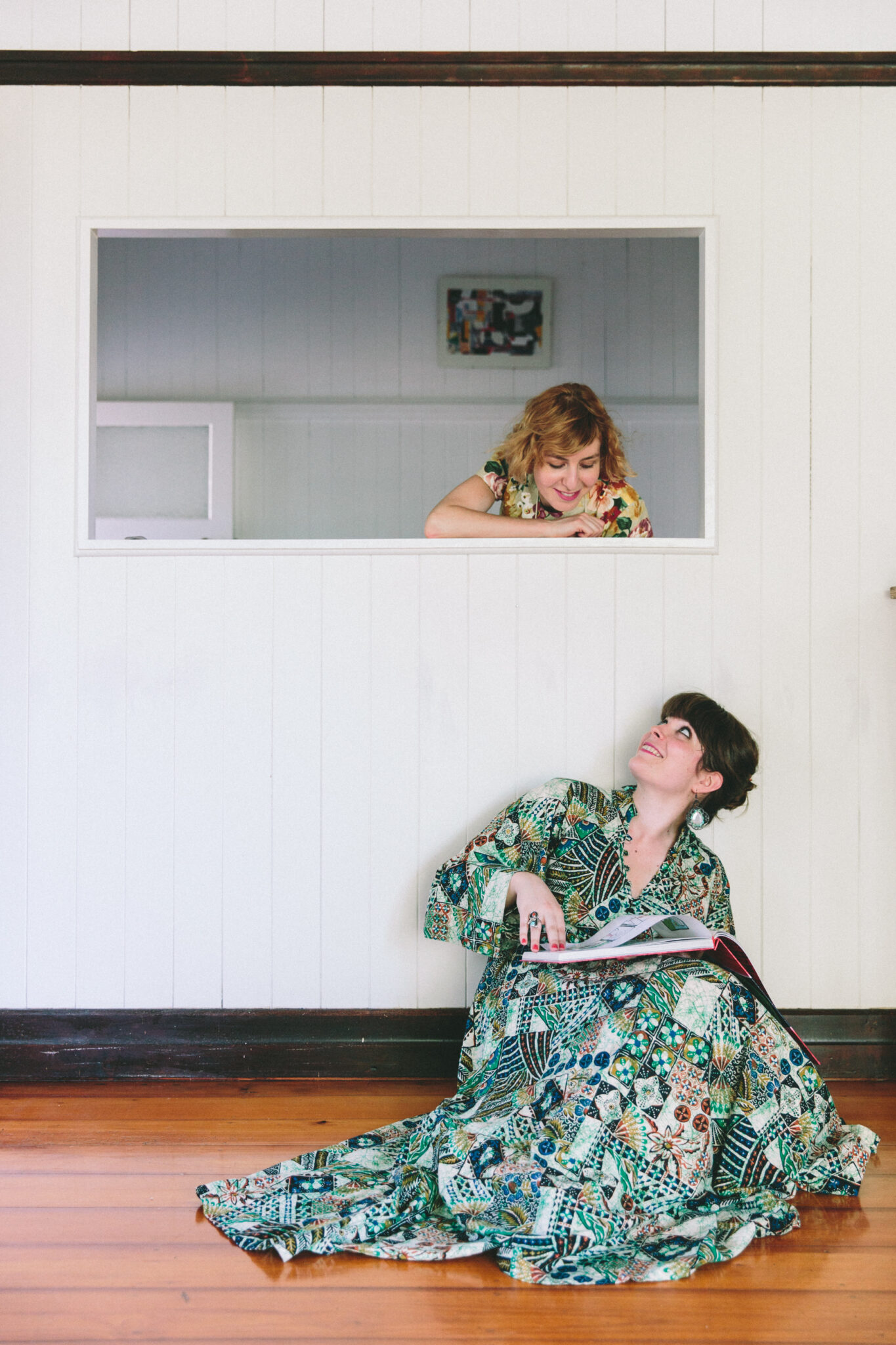 In August 2014, the pair was awarded a prestigious research fellowship at the State Library of Queensland, where they worked for six months exploring the history of fashion retail and manufacture in Queensland. They released this content online, including 16 new essays, called High Street Histories.

Together, Nadia and Madeleine have a Masters and a PhD in fashion theory and art history, and recently finished a research fellowship at the John Oxley Library. They have a combined 20 years’ experience as curators, producers, and researchers in the arts, and have run gallery spaces, curated major exhibitions, and managed large budgets to realise their own independent projects.

Following the success of Fashion Archives, the public have recognised that Queensland has made a unique and fascinating contribution to international fashion. Nadia and Madeleine are about to publish a selection of this content as a book called Remotely Fashionable: a story of subtropical style.

To get this project off the ground Nadia and Madeline raised over $8,000 in contributions from 109 supporters through an innovative Pozible campaign, this received matched Australian Government support of $8,640 through Creative Partnerships Australia’s MATCH funding program.

What was your inspiration for the project?

It certainly has been an incredibly ambitious and challenging undertaking for such a small team.

Building the project from scratch, including a twelve-issue online publication, and now a book, has been a complex and all-consuming task. But the thing that got us started was that we felt there was a gap for a project that took fashion history seriously and presented it in a compelling way.

When we looked around our own backyard we realised that very few people had turned their attention to Queensland fashion, either past, or present, particularly outside of an ‘industry’ context. We also saw the potential for the topic of fashion to elucidate women’s history in particular, as this is something else that has been overlooked.

We’re really contributing to a bigger conversation about the importance of fashion on the periphery and looking beyond the well-covered narratives of global glamour centres like Paris, London, and New York – hence the title of our book, Remotely Fashionable: a story of subtropical style.

You ran a successful campaign through Creative Partnerships Australia’s MATCH program, crowdfunding more than $8,000 which was matched by us. How did you go about generating support from the community?

We really did our research as we hadn’t done a crowdfunding campaign before, but we eventually realised that we had in many senses a head start.

We’ve been building a loyal readership for the past three years with The Fashion Archives online, and we had a strong platform to reach this, and new, audiences.

We felt our ‘ask’ and our rewards were appropriate and compelling for this audience, as so many people had already approached us over the years with requests to transform our work into a book. We very deliberately kept our rewards manageable and realistic so that we didn’t create a whole other workload for ourselves.

We also kept the target very low ($5000), which meant that we had a good chance of reaching it. But we must say this can have its drawbacks because it doesn’t nearly reflect the true costs of the project; this is one of the balancing acts inherent to crowdfunding (asking for too much can be a deterrent).

We were also fortunate to get some press coverage during our campaign, but, that being said, we observed that it was really our core audience who contributed the most.

How did you originally hear about the MATCH program and what you choose Pozible for your campaign?

We are always on the lookout for ways to fund our work and came across MATCH online, because we had thought about crowdfunding in the past, it seemed like an ideal way to maximise our opportunity.

We went with Pozible after doing quite a bit of research about the various platforms because it had good public recognition and a wide variety of creative projects were being supported. Based on what we’ve learnt from this campaign, we think in future we will probably develop our own, self-hosted campaign through our own website, as we have good web traffic.

What were the particular challenges of your crowdsourcing campaign?

Managing a crowdfunding campaign was a hugely time consuming process. We knew this going in, but were still surprised by just how much work we put into it on a daily basis.

On top of this, when people are contributing their own money, they have certain expectations of what they should see back from that, including a quick turnaround of the project from the time they support the campaign to the time they see the project delivered.

In order to achieve this quick turnaround, we have been working around the clock for the past couple of months to deliver.

Unfortunately, the money raised from the campaign is not sufficient to pay ourselves (we know that is the case for many other cultural workers!), so this has been a volunteer endeavour for us on top of other jobs.

Other than the financial support raised, what are some of the other benefits of generating a high level of support from the community for your project?

The community support has enabled us to be independent, rather than relying on a publisher for our book. This has allowed us to stay true to our creative vision, and will also give us more control in the long run.

We know that going forward we can demonstrate to other funding bodies and partners that we have a strong backing for our work and we feel that we can tap into this community of supporters again for future projects.

Do you have any words of advice for other artists and creators looking to run a crowd funding campaign supported by the MATCH program?

Crowdfunding is not appropriate for every creative project. We observed this when doing our research ahead of launching our campaign.

The most valuable resource we found was not written advice, but rather the history of successful and unsuccessful campaigns and what we could learn from them.

We saw many good projects not get up because they were too complicated, or asked for too much, and we know that people outside of the arts often don’t have a realistic sense of the amount of money and resources it takes to put on a creative project.

We know that there is a real issue with giving fatigue, so we wanted to be strategic about limiting the number of ‘asks’ we made of our audience.

Why do you feel programs like MATCH are so important?

Cultural projects like ours are expensive to produce, and it is unrealistic that they can be funded solely through crowdfunding.

While they’ll never be commercially viable, they make a very important contribution to our cultural identity and highlight the work of creative practitioners in our country.

We think the support of MATCH acknowledges that while there may be an enthusiastic community of supporters who are willing to put their money behind a project, these projects do need, and should have, additional government support to ensure they are realised.

The MATCH program also lent our crowdfunding campaign credibility and made our backers feel confident that we could deliver the project.

The online fashion archives are a rich, accessible resource and history of Queensland fashion, and you are now in the final stages of producing your book, what have been the challenges in taking this project to print?

Scale has been by far the biggest challenge. Online we had no real word limits and could be expansive in our articles and focus.

For the book we had to rein in our focus, and decided to look at the historical rather than the contemporary. This meant a lot of hard decisions and an incredible amount of editing.

Images were another complexity, as we drew from many collections, and needed to reapproach every source for additional print permissions, which often attracted fees that we hadn’t encountered when using them online.

Where and when can Queenslanders buy their own copy?

The book will hit the shelves from early December 2015. Many pre-ordered the book through our crowdfunding campaign and will have it delivered to their doors in time for Christmas.

We are working on an online store where the books can be purchased, and we have the support of a very talented distributor who will help us get it into a bookstore near you.

What’s next for you both?

Working on Remotely Fashionable has ignited a desire in us to continue publishing. We’ve got many more book ideas bubbling away, and still feel that there is a gap for the kind of perspective we are bringing to the popular topic of fashion. Stay tuned for the next one.

**  This article was originally published in the ART/works October 2015 e-newsletter of the Department of Communications and the Arts.