In May 2018, one year after La Mama Theatre’s 50th birthday, the theatre was destroyed by ﬁre. At the time the organisation was planning a celebration of 10 years since the successful fundraising campaign that allowed them to buy the building. La Mama shares their journey of their ‘Rebuild La Mama’ campaign.

We now faced needing to launch a new capital campaign, having quite recently run a big campaign for a building that was now gone… not a great sign of gratitude for the previous donors. Our target was a minimum of $2.5 million to get the theatre back into operational use (excluding any insurance payout).

There was an immediate outpouring of community support for La Mama which raised $43,000 from our urgent ‘Keep La Mama on Stage’ campaign. This was community driven and paid for performance venues to ensure all productions were given the opportunity to proceed.

We were delighted to receive a call from then State Minster of Creative Industries, Martin Foley, with an unexpected grant of $1 million dollars as well as a grant from Creative Victoria allowing us to employ a Fundraising Manager for the new campaign.

With the Fundraising Manager hired, we prioritised creating a philanthropic alliance of major contributors to match the $1 million from State Government. It was important this alliance did the heavy lifting of the campaign. It was made up of trusts and foundations based in Melbourne including Gandel Philanthropy, John T Reid Charitable Trusts, Lord Mayor’s Charitable Foundation, Sidney Myer Fund and one anonymous donor. Of these trusts and foundations, La Mama only had established relationships with the Sidney Myer Fund and Lord Mayor’s. No other previous relationship existed. Other important contributions at this time came from Heritage Victoria and the City of Melbourne.

The government’s $1 million gave us an essential and powerful start. It demonstrated immediate progress and gave us exciting news with which to approach local trusts and foundations in the attempt to match funding. The company and board had the encouragement to form a philanthropic alliance with enthusiasm. Hitting the major $2 million hurdle was key to the success of the next stage of the campaign. 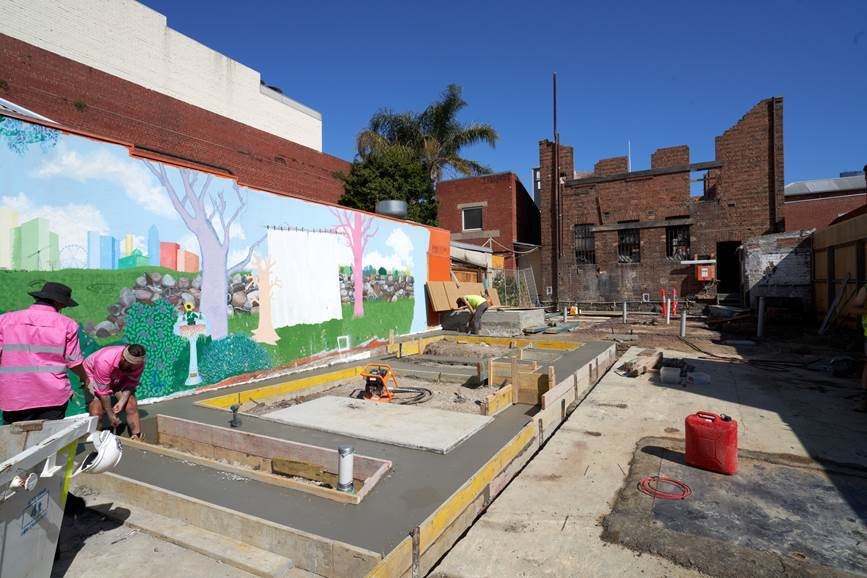 Once our target seemed achievable and appropriate to approach our closest supporters – who were in big numbers but modest in the amount they could give – we decided to leave the public ‘Rebuild La Mama’ campaign open to the end. This was a good decision and ensured that all these smaller contributions had meaning. The public campaign raised $215,346 and provided some important community ownership of the project.

We employed a designer and a publicist for the campaign, creating a recognizable campaign identity and delivering good media coverage as a result.

We developed ongoing personal relationships with the individuals involved in the philanthropic alliance. This included foundation trustees and major donors.

We sent every donor a hand-written card and a La Mama book to donors who gave over $500. More than six hundred people donated, and we are carefully managing ongoing relationships with all those who gave.

It felt important to launch a campaign as soon as possible after the fire so as not to lose momentum. However, capital campaign fundraising proved challenging without a clear financial target and rebuilding costs frequently changed. It took time to finalise the building design, settle the insurance payout and work out exactly what we needed to raise. For this reason, it was essential that our communications were honest and open, but this made things a bit unclear during the early stages of campaign communication.

Our target proved to be slightly low and we had to quietly seek additional funds after the campaign as the budget requirement had increased. This small gap was finally filled by grants from Form 700 and The Hugh Williamson Foundation.

Our communications to donors and stakeholders  had to be very clear because there was a public expectation that the loss would be covered by insurance. This was not the case, and we wanted to use the opportunity to improve the venue which required additional funds.

We developed a communications strategy for the rebuild, updating our networks regularly on progress through time-lapse video and provided regular updates on our website. We took everyone on the journey of progress to re-building the theatre. We made sure to check in with all donors about how and which forms of communication they would like to receive. This was welcomed.

In recognition of our supporters, we hosted a ‘We Made it’ event on site, with all major donors invited to an exclusive event that celebrated the ‘turning of the sod.’ This gave donors time in the theatre before it became active, with cake, coﬀee and speeches of gratitude. This received good media attention.

La Mama will hold an event to celebrate the opening. All donors will be invited to come and participate. There will be a formal donor board recognising every donation and the ﬁrst painting on the famous La Mama walls will recognise all contributions made to the campaign. As is the La Mama tradition at each production, this painting will be over-painted, but the work will be documented for archival purposes.