The Stella Prize on turning ‘friend-raisers’ into fundraisers

The Stella Prize, a major literary award that celebrates Australian women's writing and an organisation that champions cultural change, used Plus1 to raise funds for a development manager.

Tell us about your Plus1 fundraising strategy.

As a small, grassroots start-up we were aware that  fundraising was going to be critical to our survival; and that to do this optimally, we’d need a professional fundraiser on the case. Being in the position to appoint a part-time development manager had been on Stella’s wish list for some time, so when the Creative Partnerships Plus1 program was announced, we saw our opportunity and seized it with alacrity.

Until then, we’d relied heavily on the voluntary efforts of Board members, especially then Stella Prize Chair, Aviva Tuffield. It was a huge call on their time, and was netting only fairly modest results, with events often turning out to be ‘friend-raisers’ over fundraisers. Friends are most welcome, of course, but Stella’s financial realities meant that we needed financial supporters – in number, and at substantial giving capacity – or face an early and demoralising demise.

We hoped that the Creative Partnerships’ matched funding would provide an inducement for donors; a position that was eventually vindicated. We understood early that our best shot at securing the funding we needed, at the speed required, lay with individual donors. Philanthropic trusts and/or corporate prospects may have been equally swayed by our pitch, but funding from these sources can take months or even years to come to fruition.

At the same time, we needed to redevelop the Stella Prize website for a number of reasons: one being that the software it was developed with was being discontinued, but mainly we were aware that the Stella Prize website, as it then was, didn’t adequately promote Stella as a recipient of charity dollars, or have the capacity to celebrate supporters and tell their stories in the way we wanted.

We sought matching funds for a development manager, and website upgrade. At first, we cast a broad net, approaching a fairly large number of individuals, many of whom we’d not made a specific ask to before. While these people either continue to support Stella at a more modest level, or may yet come onboard as major supporters, they were reluctant to do so in the timeframe we needed, and at the required level.

In this context, and anticipating fierce competition for a limited pool of funds via Creative Partnerships’ Plus1, we discussed the matter with our founding donor, Ms Ellen Koshland, who graciously agreed to contribute $15,000 towards the cost of a Development Manager salary. Another early donor, Ms Joanna Baevski, agreed to donate $5,000 towards the cost of a website redevelopment. With these commitments, we felt ready to get serious about putting Stella onto the best possible fundraising footing, and start to attract the money we need to secure the Stella Prize’s future.

Describe your project and the outcomes you hope to achieve.

Creative Partnerships’ Plus1 funding has allowed us to: 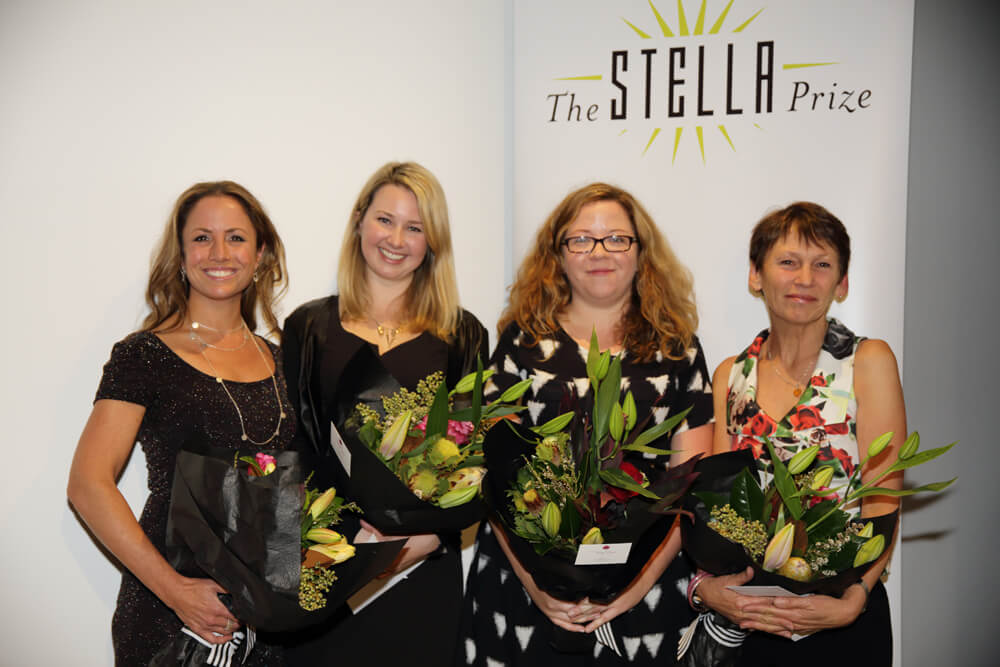 Do you feel more confident in your overall development strategy and ability to achieve results?

Undoubtedly so. Stella was conceived by a small group of women working in the publishing and literary worlds, who were determined to challenge a discriminatory status quo, and does not follow a government-funded model. Hence, our development strategy is central to our very survival and, in this context, it’s crucial we get it right.

One of the earliest tasks completed by our Development Manager was – in consultation with donors, board members and other stakeholders, and employing a tried and tested fundraising methodology – to author a detailed development strategy to guide fundraising efforts over the next three years.

As part of this process, a three-year campaign entitled Stella Forever has now been launched. It is a nationwide campaign, focusing in the first instance on circles of wealth – individual donors with the requisite inclination and capacity to give – and via intimate events in Melbourne, Sydney, Adelaide and Brisbane, with plans to target other capitals in later phases.

Guest lists have been developed and invitations made with the help of Board and existing donor networks, and supported by their personal involvement.

The new development strategy also guides submissions to Stella’s ‘best fit’ trusts and foundations; approaches to prospective corporate partners; activities to access philanthropic ‘gatekeepers’ and circles of givers currently unknown to Stella (and vice versa); mechanisms to ensure regular appeals to existing supporters; and importantly, programs to build the foundations of broad-based fundraising into the future.

We now have a better understanding of the processes involved in turning ‘friend-raising’ events into fundraising successes. We are engaging better with our donors and supporters and implementing stewardship procedures.

Whereas once we had concerted, and sometimes moderately successful (if largely piecemeal) efforts by an exhausted Board and Chair, this year we now have a strategic plan to guide us, as well as experienced ‘arms and legs’ on the ground, to support and co-ordinate our collective effort. We’re enjoying greater success and are becoming more knowledgeable about the fundraising discipline – the art and science it combines.

These factors increase our confidence in our overall success and would not have been possible without the Plus1 grant.

How does your project address challenges or needs within your organisation?

The Stella Prize’s primary and pressing challenge lies in securing its existence. There are already early signs of Stella’s impact, with increasing book sales by our long and shortlisted authors, significant media coverage and grass-root support, and even the first-ever, all-female Miles Franklin shortlist in 2013. Yet, in this context, at the time of application Stella was in considerable financial peril.

Despite early successes, Stella faced another significant challenge in growing fatigue and burnout on the part of its Board members. Bringing the Prize into existence took an enormous amount of hard work in and of itself, and constant, ongoing fundraising was proving exhausting with only the assistance of pro-bono work from the Board, especially the Chair.

Being able to employ a Development Manager has helped ameliorate both issues of burnout and organisational insecurity. For this year we now have a designated person to take responsibility for fundraising, a fact that has relieved pressure on the Board and Chair. And with the expertise our Development Manager brings to the role, we are experiencing greater success in our fundraising. |

While Stella remains financially insecure, we now have a clear picture of the resources required to secure our future, and a better understanding of the work involved in doing so successfully. There’s a plan in place and much more optimism re Stella’s ability to achieve sustainability.

At the time of Stella’s application to Creative Partnerships’ Plus1, it had just one (completely overloaded) part-time employee. With additional funds raised this year, we have been able to resource a one-day per month bookkeeper position, and have also been able to make provision for extra administrative support for the Prize Manager at peak periods of the prize cycle. In short, we feel more confident that we have the skills and resources required to successfully acquit our fundraising goals.

What are the benefits of Plus1 to your organisation?

Factoring 2015 and 2016 pledges already made, we have now raised more in six months than the preceding two years combined.

With solid, professionalised fundraising systems in place to support annual giving and donor retention, some extra money in the bank to aid a sense of organisational security, and a three-year development strategy devised, we now feel more confident that Stella has a future; that it is a feasible and viable organisation, with a clear mandate and considerable attractiveness as a recipient of charitable giving.

We understand that we are in the foothills of a long journey towards organisational sustainability, but with the assistance of an experienced fundraiser, and a streamlined, fundraising-focused new website, we feel increasingly sure of our ability to achieve our goals, and ensure that Stella is around for the long haul.

This is a substantial change from our position at the start of the Plus1 project, and of substantial benefit to Stella as an organisation.

Have you increased your knowledge and skills in fundraising and partnerships as a result of Plus1?

Since getting started two years ago, Stella has been on a steep learning curve, gaining new skills and knowledge at every turn. Stella is largely made up of publishers and writers – people from the literary world – as opposed to the not-for-profit sector, with their associated fundraising agenda and body of skills and knowledge in this domain. As such, there’s been a lot of learning along the way.

In terms of identifying, obtaining and maintaining partnerships, things that stand out as fresh knowledge include:

Will Plus1 leave a positive legacy in your organisation?

Funding from the Plus1 program has been invaluable and allowed the Stella Prize to take a giant leap forward. It has allowed us to use the skills of a dedicated Development Manager to conceive a fundraising strategy and start to implement the Stella Forever campaign.

The funding has also enabled a much-needed website overhaul and upgrade, which has put Stella on a ‘fundraising footing’ and allows us to engage prospective supporters and to showcase our existing donors. Without the Creative PArtnerships’ Plus1 grants, the Stella Prize would be in a considerably weaker position.

We now have a great new website with enhanced functionality, significantly more fundraising income in the bank, and a three-year campaign underway to secure our future. We have approximately 50 new donors, at varying levels (including major donors) and have received repeat gifts from many existing donors, as a direct result of additional effort and expertise in our development activity.

The Plus1 funding has been instrumental in this, coming as it did at a time when the Stella Prize was facing major challenges to its future security. In time, we hope that the legacy of this support will be nothing short of the Stella Prize, in perpetuity, as a force for good for generations to come.