Our new research survey finds private sector support is on the rise. 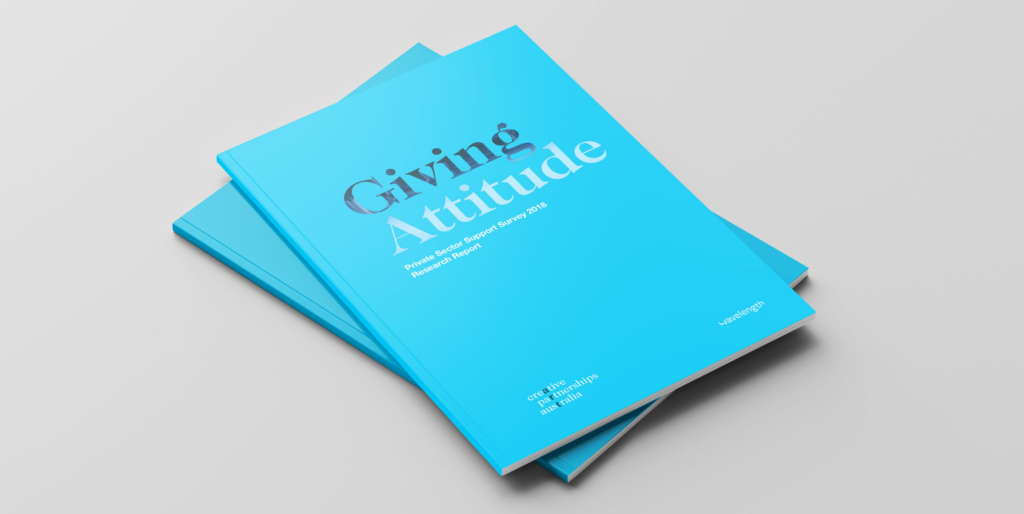 Creative Partnerships Australia’s new research survey indicates support from the private sector for the arts is on the rise and is a significant contributor alongside government support and earned income to substantially grow philanthropy and build sustainable arts organisations in Australia.

The report, Giving Attitude, is designed to inform policy and advocacy for investment in the arts across Australia. The first in what is intended to be a biennial sector-wide survey of private sector support for the arts, the report provides baseline data from which trends can be measured in subsequent years.

Over 2,200 arts and cultural organisations as defined by the International Classification of Non-profit Organisations (ICNOP 1 100) were invited by Creative Partnerships Australia to participate with a survey response of 25%.

The report established total private sector support in Australia was estimated at $608 million with this support attributed across arts and cultural organisations via philanthropic donations and grants, cash and in-kind business sponsorship and the value of volunteering.

Minister for Communications, Cyber Safety and the Arts, the Hon Paul Fletcher, said “The private sector is an important source of funding for Australian arts organisations, together with funding from the Australian Government. This research undertaken by Creative Partnerships Australia takes a measure of the level of private sector support for the arts in Australia, and I strongly encourage all Australian arts organisations to participate in the 2020 survey.”

Creative Partnerships Australia’s CEO Fiona Menzies added the report provides insights into the key experiences and challenges Australian arts organisations are facing and outlines both actual results and their perception of their ability to fundraise.

“The results show private funding contributes a higher proportion of the total income of micro organisations compared to their larger counterparts and the essential role strong fundraising plays in supporting these organisations to build a robust arts sector,” Ms Menzies said.

Giving Attitude is a report summarising the results of a survey undertaken of 2,208 arts and cultural organisations across Australian in relation to private sector support.  Approximately one quarter of organisations sent the summary completed and submitted it, which is regarded as a good result.

The headline results are:

The private sector support survey was designed to inform policy and advocacy for investment in the arts across Australia.  The report, Giving Attitude, introduces a new rigour and depth to the question of what investment is raised, what leads to success, and how the challenges of fundraising can be overcome.  It gives us a window into how CEOs and fundraisers are thinking, feeling and behaving in relation to raising private sector income.  It offers arts and cultural organisations a guide to the most successful fundraising strategies, and the ability to see how their fundraising income and costs compare with others.  As this is a new survey, it sets a benchmark for the future – and the subsequent reports will enable us to track the trends.  It is intended the survey is conducted every two years.